In Part – I of the series, we talked about challenges faced by us in setting up monitoring system for our production stack which grew from a single EC2 instance to tiers of auto-scaling web servers, dedicated clusters of databases and other centralised systems. In this part we are going to discuss the monitoring system in detail, and particularly our application of TICK stack.

Virtually any service will have a database at it’s heart; and so the choice of monitoring stack was dependent on choice of underlying database. A time series database was an obvious choice; and the other parameters being write/read performance, resource (cpu, memory, disk I/O and space) footprint and ease of provisioning & maintenance, since we have a very small devops/system team. There are many resources available comparing various TSDB databases (like this one); what attracted us the most about InfluxDB was low entry barrier. We evaluated few alternatives: we were already using ELK hence Elasticsearch was also an option. Although Elasticsearch can deliver high read/write performance, the performance comes at the cost of resource needs. Elasticsearch is designed for text-search, which doesn’t really match the nature of a time series. The underlying data-structure of InfluxDB reflects this difference: it uses LSM tree (rather TSM tree) for data storage.

InfluxDB won the race on many counts:

Let’s take a quick look at Telegraf & InfluxDB first.
Telegraf employs a plugin based architecture where input plugins can perform measurements and then output plugin can relay it further to storage. Let’s quickly generate a sample telegraf configuration and start the server:

The [[input]] sections define entites to be instrumented: address of service, metrics to collect, etc. For [[output]] section; we’ll be mainly focused on InfluxDB. Now with above config, telegraf would start to collect CPU & memory metrics of your machine.
InfluxDB organizes time-series data in ‘measurements’ (conceptually equivalent to a table in an RDBMS) with timestamp being the primary key. Measurements can have ‘fields’: numerical values which would be used in aggregations functions (i.e. ‘average’ cpu utilization of a processor core); and ‘tags’ which would be used in grouping data (e.g. CPU utilization per node).

Congratulations, telegraf is successfully collecting data from your system!

Armed with the basic knowledge of telegraf and influx; let’s dive into how monitoring system works at TravelTriangle!

We started with Cloudwatch, as any system hosted on AWS would; however there were couple of shortcomings:

Although you can provision agents like collectd yourself to collect memory/disk metrics & sub-minute CPU metrics and just use cloudwatch as storage – but that essentially makes it similar to Telegraf & InfluxDB.

At TravelTriangle, we are now using telegraf for collecting system metrics; quite like the example above. Couple of things to note here though:

And the outcome is – stunning visualizations like this one!

A large portion of TravelTriangle is built on Ruby-on-Rails platform and is served using passenger/nginx server with nginx acting as load balancer. Passenger has a single threaded architecture; that means other requests have to wait in queue while one request is being processed. Thus, we found the most useful metric to be length of the queue; correlating queue length with resource utilization (cpu primarily) can directly tell you if your servers are over-worked, or they are simply waiting on IO (db requests, etc). Passenger reports this metric via (rvm)sudo passenger-status --show=xml; we wrote a simple script to parse this output and feed the result to influxdb directly:

Now, on one of our better days, this graph looks like this:

Telegraf also ships with a built-in passenger plugin for the same purpose; however if you are using rvm, you’ll need to make rvm environment available to telegraf user which can be even more trickier if you rvm installation is at user level. We have started migrating towards an rvm-free setup in production environment; but do let us know if you are able to make it work with rvm!

Telegraf ships with bundled varnish plugin; just enabling it in telegraf.conf does the trick. Note that telegraf need to be deployed on the same server node as varnish.
# # A plugin to collect stats from Varnish HTTP Cache
[[inputs.varnish]]
## The default location of the varnishstat binary can be overridden with:
binary = "/usr/bin/varnishstat"
## Glob matching can be used, ie, stats = ["MAIN.*"]
## stats may also be set to ["*"], which will collect all stats
stats = ["MAIN.cache_hit", "MAIN.cache_miss", "MAIN.uptime"]

We couldn’t find a built-in solution to monitor Node.JS servers with InfluxDB & Grafana; however we considering an approach like this to start with; or use PM2 APIs to put together a script… let us know if you have a better idea!

Like many RoR stacks, we rely heavily on Sidekiq for async job needs. As par Sidekiq documentation, a single sidekiq server must not process more than a “few” queues and no more than 50 threads. We process millions of jobs per day, distributed across tens of queues for better isolation and control and a single Sidekiq server can’t scale to this extent. As a result we ended up writing own deployment scripts to start multiple Sidekiq clusters with different queue sets. Now Sidekiq provides a nice web UI for monitoring; however, at this scale we needed something more. We were faced with a few constraints: 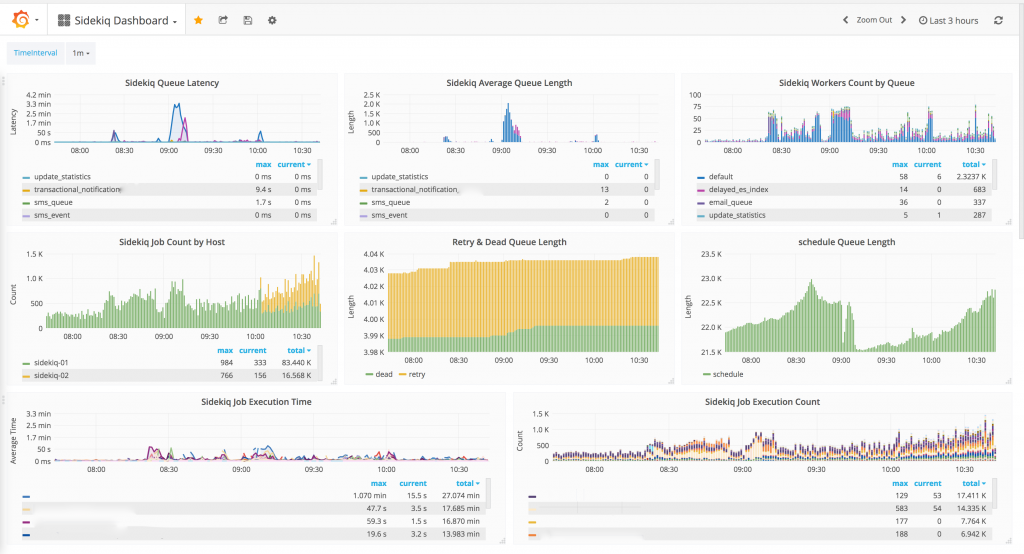 Telegraf ships with bundled elasticsearch plugin which internally uses _cat, _nodes, etc APIs for collecting various measurements. For us with only basic understanding of elasticsearch internals, the sheer volume of measurements was overwhelming and putting everything on a visually interpretable dashboard seemed like a challenge. Fortunately, there are community dashboards available which saved us the effort of creating them. The dashboard are available as JSON downloads which can be directly imported into Grafana, and recent versions add the ability to directly import from grafana.com. We found one such dashboard which contained plots for most of telegraf plugins.
One measurement was missing though – response latency; which was something we wanted above all. Now, since only our Ruby backend makes elasticsearch API calls; we, again, ended up patching elasticsearch-api gem to inject our instrumentation. This measurement would be from a client’s view, but within same VPC network latency is practically predictable. Take a look at lib/elasticsearch/api/namespace/common.rb file in elasticsearch-api gem:
def perform_request(method, path, params={}, body=nil)
client.perform_request method, path, params, body
end
Simply wrapping this in Monitoring.with_benchmark did the trick! Moreover, you can generate tags from method and path to get average latency per-index and per-operation (GET, POST) basis. Alternatively, you could patch lib/elasticsearch/api/actions/bulk.rb and other actions.

Telegraf provides a plugin for MySQL; however since we are using RDS as our database service; we had a lot of metrics already available and simple scripting made it easy to collate & parse slow query logs. We haven’t explored the plugin so far, but it seems to promise a lot – we’ll share our experience once we use it!

We started using InfluxDB just over a year ago. Our traffic has grown more than ~5x during this time with writes on InfluxDB going upto ~1500/sec. Within this time period, we had just a couple of outages in monitoring system, and few noteworthy lessons from those incidences:

This concludes part II of the series. In next part we’ll take a deep dive into other two remaining components of our monitoring stacks – Kapacitor & Grafana.