Most of the products start with just a handful of simple use-cases. Systems starts with simple architecture, with a bunch of tables and a framework built upon standard design pattern like MVC.

We choose Ruby-on-Rails as the framework, and built our system around rails conventions such as:

Fast forward to a few years. We launched many business verticals, many features were added, deprecated, iterated and experimented upon. We started to observe some shortcoming to the standard approach:

While issues listed earlier issues were due to hastily written code or simply how the system evolved over time, the configuration management had to be seen in wider context: ability to dynamically configure workflows, not just some values/conditions. Realtime health metrics, standardised interface for analytics, etc. needed to be baked-in as well!

We knew that the system needs to move in a direction where is more declarative, flexible and decoupled. And hence, with the objective of solving current problems in a wider context, we decided to move towards event-driven architecture, which can be visualized as: 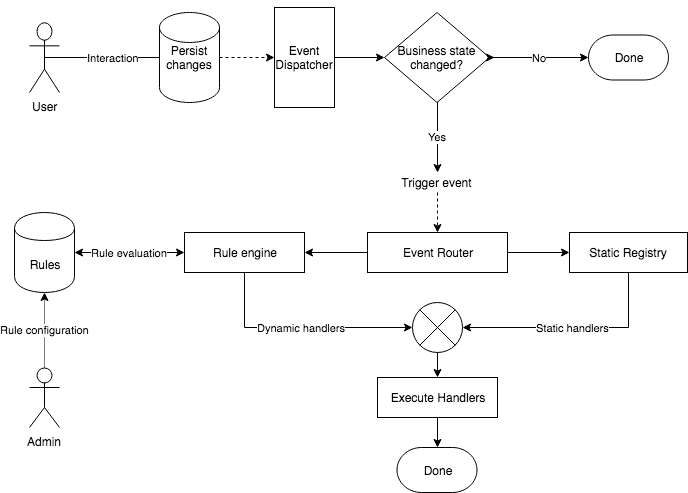 The flow control is simple:

To explain the above workflow, let’s walkthrough an example: “Send diwali discount email after 30 minutes if traveler fills necessary preferences (hotels, budgets, etc) for a trip created during October 15-20th 2017”. This can be realized with following configuration and control flow:

An admin within TT would configure notification_handler with trip_created_event ruleset via rule engine interface with following conditions: 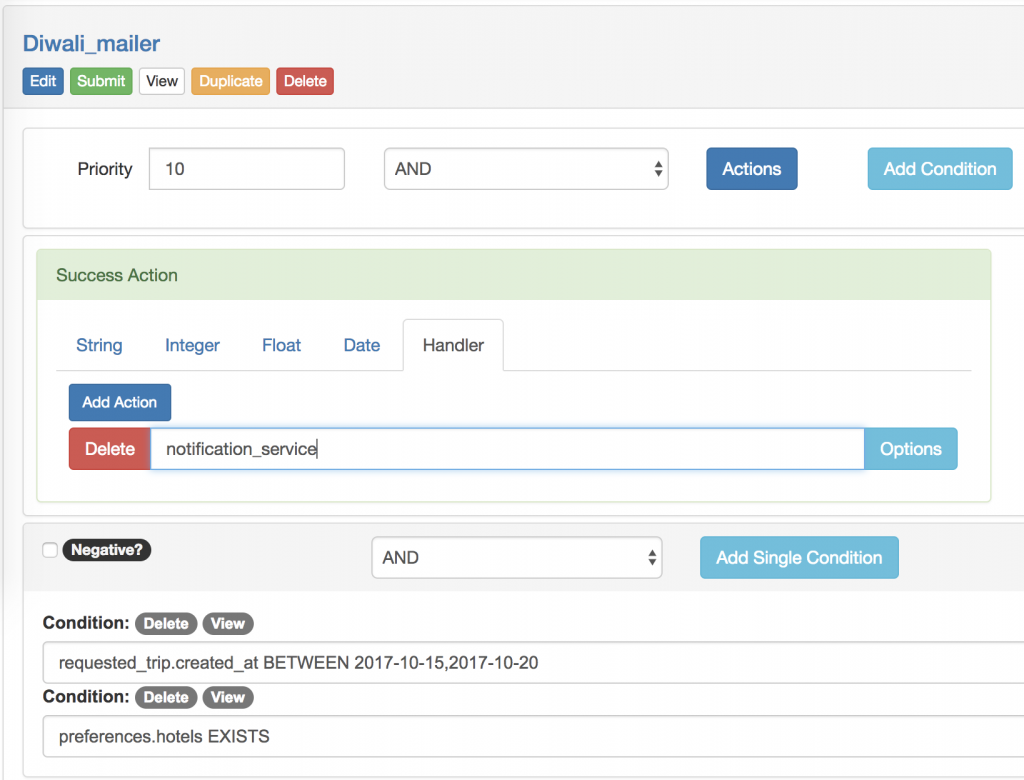 If this rule evaluates as ‘success’, rule engine’s return value with notification_service of type ‘handler’. Clicking on Options allows setting values for the handler:

In technical terms, this is how the configuration is represented via rule DSL:

A traveler then creates a trip. In rails context, an object of RequestedTrip model gets created and saved. Rails provides an ability to configure ‘hooks’ in object lifecycle via callbacks. We added eda (event-driven architecture) system entry-point as an after_commit callback, using some meta-programming elegance!

After some processing, the hook triggers an event:
def trigger
Eda::Client.log :info, { event_name: event_name }, 'About to trigger event'
router_class_name.dispatch(event_name,payload)
end

The executor nicely records handler success/failure metrics in our metrics and monitoring system, giving the the clear view of system stability & performance. The visualization speaks for itself: 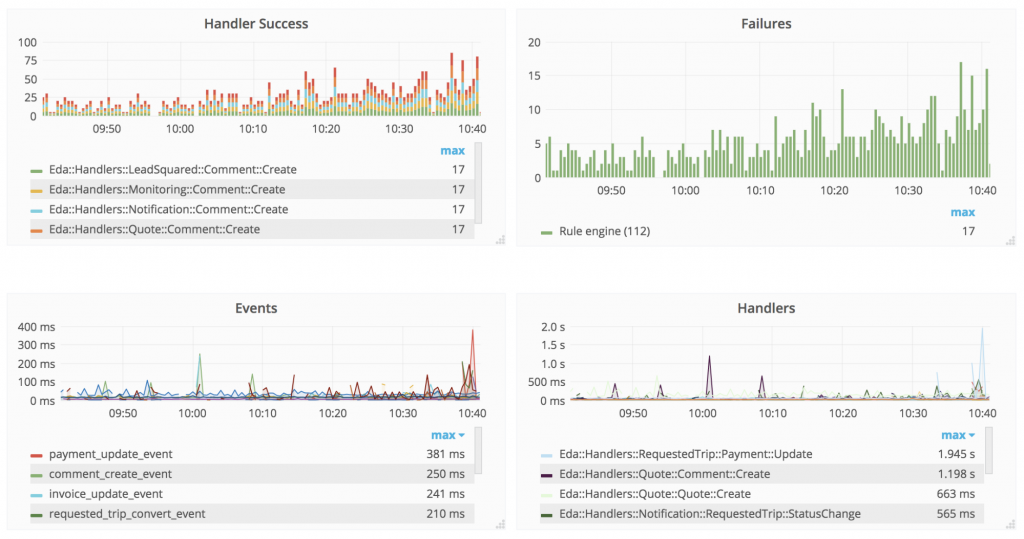 PS: If you want to understand our metrics & monitoring system which generates stunning visualisations like this, check out part I & part II.

The immediate impact which we noticed was low-turnaround time required for simple changes. One of the first use-case of this architecture was configuring an automatic phone call to our customers who have created a trip. An IVR handler needed to be written to trigger a third-party API for initiating phone call and it would take two parameters: call workflow id (as “destination missing” would have a separate content in call vs “hotel preferences missing”) & trigger delay (in case we don’t want to trigger a call immediately).

Now, to configure IVR handler, we would simply go to rule engine, and configure a condition (i.e. destination EXISTS) and as a return value, configure IVRHandler with workflow_id and delay as parameters! One can tweak any of these parameters (i.e. create new workflow for new conditions, tweak trigger delay, etc), or event remove the IVR handler without needing any development cycles!

The power of this architecture lies in proper design of events and handlers. Not all changes would have a ‘substantial’ impact on the system and hence only a handful of changes should be modelled as ‘events’. Not adhering to this principle would eventually bloat list of events & handlers and it would be hard to maintain stability.

Similarly for handlers, the power lies in flexibility. However, handler should expose only what is needed to be configurable, and not every single value. In previous example, for notification_service handler ‘sending_delay’ is configurable, however, recipient address isn’t (which will always be creator of trip).

Lastly, rule engine DSL should not be designed as a replacement for code itself, and more complex conditions should be pre-computed and simply exposed as keys. Let’s tweak the example above:

So far, we have barely scratched the surface of the power of this architecture. For instance: